Melbourne singer-songwriter Jeff Herd has just released his first album Boy Down, a collection of jazz and alt-pop songs, in which he sings about, ‘the beach, growing up, school, family, feeling isolated, coming out, desire, getting older’. Jeff plays multiple instruments and co-arranged the album. Jeff is interviewed by Bent Street publisher Gordon Thompson, who also has a musical secret life.

GT: Jeff, congratulations on Boy Down – I’ve been sharing it with friends and grooving along with it in the car. I love ‘Faggot Artists’, ‘Boy Down’, ‘Pillow/ Hammer’. It’s a lyrically rich, playful, and musically varied album. And emotionally raw and punchy. Is this your first album?

JH: Thanks Gordon. I’m stoked that you like it. Yes, Boy Down is my first album. I’ve been a hobby musician since I was a kid, singing, playing guitar and piano. But this album really started with me leaving work in my mid-50s to pursue music. I went back to school and studied singing and then song-writing. My first song-writing teacher was Laura Jean, an amazing Melbourne singer-songwriter, and then Caroline Kennedy, an adventurous musician-artist, and others.

GT: How did that work?

JH: It was a workshop-type environment where we would bring songs or bits of songs in for feedback, and I found it really supportive and productive. Over 18 months, I wrote ten songs that seemed to fit together enough for me to try and make an album. So it’s been a long-term dream that’s finally happened.

GT: An ‘album’ is a curious beast – almost old school in these days of Spotify. I’m working on an album myself and I know that it sets its own particular ‘problems’, such as what is the overall mood and tone, what instruments? Did you encounter any challenges like this in the writing and production? 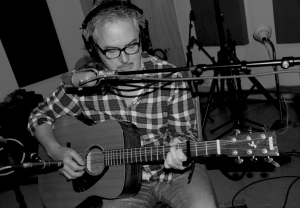 JH: It was a bit unplanned, but also full of aspiration. I’m a big fan of well-rounded albums. Once I’d finished writing the songs, I could see an autobiographical thread running through them, as well as a mix of musical styles. The bulk of the recording is John Lee, my producer, and me: a two-person band, so that helped cohere things. And I tried a lot of different sequences of the songs to reach the final order. So things eventually seemed to fall into place, a bit like solving a puzzle.

GT: And a puzzle where the pieces keep on changing! Which of the songs, maybe in the studio, or just as song, gave you the most headaches? Which one, by contrast, seemed to write and record itself as if by magic?

JH: The lyric for ‘Song for Mark Murphy’ wrote itself. Mark was an amazing American jazz singer, a hero of mine, who died in October 2015. As I was reading an obituary, there was a reference to his partner, Eddie, who had died in 1990. I was blown away that Mark was gay and I hadn’t known. I was studying jazz vocal at the time, and the jazz world felt pretty straight. The presence or absence of relatable role models really affects your sense of possibility. So I poured all that out in the lyric.

GT: There are some lovely lines there – and a great setting: ‘Bebop against the silence/ trust the deeper world will channel your song.’ … And any ‘difficult’ songs?

JH: ‘White Feathers’, about masculinity and courage, proved to be really difficult in the studio. Musically it’s built on simple piano chord pattern I played as a kid, but it also switches from waltz-time to 4/4 then back again. And the lyrical mood is fairly dreamy and subterranean. We tried and then dropped bass guitar and drums, and decided to let the piano part lead the arrangement. We worked on a lot of layers: synth strings, clarinet sounds, classic moog sounds. John recorded the rain on the roof of the studio and added that. I wasn’t sure it was all going to work, but it ended up being very atmospheric and I’m really happy with it.

GT: You’ve mentioned the jazz influences here. I must admit it didn’t strike me, at first, as a ‘jazz’ album at all – the cover, the guitars and synths, the alt country. But then on other listenings I realise it’s dripping with jazz. I’ve shared the album with friends who have noted that it reminds them of The Whitlams, and I’m picking up traces of My Friend the Chocolate Cake, Barroworn, not to mention the Magnetic Fields … but what are some of your other musical influences?

JH: Influences and loves are hard to untangle. On the radio as a kid, I loved the Beatles, Stones, all sorts of pop music, Daddy Cool. Early seventies singer-songwriters – Joni Mitchell, Neil Young – made a big impact on me. I loved getting lost in the personal worlds they created. Later, Elvis Costello, The Velvets and Lou Reed’s early solo work, Jeff Buckley, Massive Attack, Gillian Welch. These are all incredible talents, and I’m not claiming any big links here. But I had the Beatle’s anthemic chorus style in mind when creating the background vocals for ‘Boy Down’ and ‘Illuminate’. I had Neil and Joni in mind when writing the piano chords for ‘Wild Freesias’. Jeff Buckley influenced the bridge of ‘Pillow/Hammer’. ‘Can’t Hold On’ started as a Lou Reed-style three-chord song before it turned alt-country. So my decades of listening pleasure also gave me some reference points to aim for. And more recently, fearless queer artists like Taylor Mac and Justin Vivian Bond – who I name-check in ‘Faggot Artists’ – have been inspiring.

GT: So my attempts to find an ‘alt-Melbourne’ ethos have fallen in a heap!

JH: Yeah, sorry about that! As a late starter, it’s true I didn’t incubate within a specifically Melbourne scene. But I did connect up more with Melbourne indie and jazz music culture through going back to school. I hadn’t known of Laura Jean or her music before she taught me, and she’s a favourite artist of mine now. For recording, I worked firstly with Simon Grounds, and then, for the album, John Lee. Both Simon and John have long careers as producers in the Melbourne indie music scene. So I connected up through the work.

GT: I’d like to talk a little more about the lyrics. I really enjoyed the specific autobiographical elements, but you also make the stories resonate in broader ways – so ‘Wild Freesias’ talks of childhood trips to the Barwon Heads, sleeping on the trip home with your head in Mum’s lap, dreamy childhood, but suddenly there are undercurrents beckoning – a wild wintry ocean. It’s a lovely mix of images. At the same time the personal becomes the political: Mum and Dad reappear in ‘Faggot Artists’, along with other heteronormative constraints, but it’s the wider world of New York gay artists who will help you dream new dreams and maybe escape what Geelong represents: ‘In Geelong I read New York faggot artists /and began to dream new dreams.’

JH: I had fun name-checking Geelong and New York Faggot Artists in the same line. The big light-bulb lesson I learned about song-writing is the key thing you have to offer is your self, your specific life experience, including your geography. So I was emboldened to write about the beach, growing up, school, family, feeling isolated, coming out, desire, getting older. And aspects of the broader world that I find important: the extraordinary contribution of queer artists to culture and progress, Aboriginal culture, climate change. And there was also a hunger to make my song, a song that I hadn’t heard a lot of. Now, let’s turn the table: what motivates or inspires your-music-making?

GT: I feel like giving a Billy Elliot answer ‘Was there any particular aspect of ballet that captured your imagination?’ ‘Yes, the dancin’. Basically I love the whole feel of music. I love being inside it – I love its flavours, the colours, how it moves. That’s the key motivation … I also enjoy words and wordplay, which is a different set of sensations, but it means I write songs rather than instrumental music. I’m inspired by gospel music and early 20th century English classical and lots of other artists – Bruce Cockburn, Lou Doillon, Joy Division, Blue Nile, whatever. At the moment I’m working on an album of settings of the poetry of Thomas Hardy, but using British post-punk as the design method – so it sounds a bit like New Order and Billy Bragg crossed with Vaughan Williams.

JH: That’s an alluring description of your current project, which I’m really looking forward to. I share your interest in words, which also drives me to song-writing rather than instrumental music. My usual writing method is to start with lyrics, which can often begin with a phrase that jumps into my head: ‘Boy Down’, ‘Full of Want’, and ‘Can’t Hold On’ started that way. Lyrics suggest rhythm, tempo, and genre and my melodies tend to flow out of them.

GT: Now, spinning the table back your way, what next for Jeff?

JH: Boy Down is out and I’m preparing an album launch, and maybe some other gigs. I’m writing again – I had a big break, but I’m back on the horse and that feels good. A friend and I have an exploratory writing project scheduled for later in the year. Checking out Melbourne music is a constant – jazz, great singers like Emma Donovan, Mama Alto, Michelle Nicolle. I’ll probably mainly head to a second album, which will take a while to pull together.

GT: Looking forward to it. Jeff, thanks for dropping in to the Bent Street Café.

Jeff Herd is a singer and a songwriter from Melbourne who recently released ‘Illuminate’, a song about Marriage Equality as well as a new album, Boy Down in 2018. Jeff was born in Geelong in 1956 and spent his first 18 years there and in Torquay before heading to Melbourne to go to Uni. He fell into the Victoria Public Service and emerged 32 years later. He lives in the south-east of Melbourne with his partner of 23 years, Philip Jones. He tries to meditate most days. His latest song is called ‘Radical Faerie Suburbia’.

Boy Down can be downloaded free from Bandcamp and Soundcloud.

Find it also at Spotify and iTunes.