extract from Slightly Foxed, a novel in development 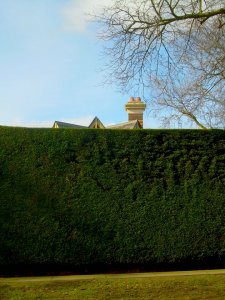 The first thing Alex noticed about Drew’s parents house was, of course, the house next door, or more accurately the massive hedge that obscured it from view. It was a monster of a hedge, two storeys tall at least. It was shaggy and un-trimmed, and a couple of areas of it seemed to be gaping open under its own weight. It grew so far out from the fence line that it entirely covered the concrete footpath – there was a small muddy trail through the mown grass of the nature strip where pedestrians had been forced to walk. Beneath this behemoth, or glimpsed through the gaping sections, there was visible a sturdy network of twigs and trunks, all dusty brown and dry as parchment, hinting at an interior that was somehow secret and extensive, as if spiders spun massive and intricate cityscapes of web, or foxes, feral and reeking, slept in little nests waiting for nightfall. Alex was fascinated by it.

Drew put the joint to Alex’s lips and Alex took an awkward stiff-lipped toke. He didn’t get much, and went back for second go, craning forward to get his lips to the joint for a bigger pull. He held it in, lay back into Drew’s underarm and, after a few moments, exhaled.

That’s what he needed. Drew had been right – he needed to even out a bit. A moment or two later, as the smoke permeated, he stopped being so super-alert and aware of Drew’s weight on him – it was too much anyway, and his synapses were overloading and not computing, although maybe his heart slowed a bit – and instead just let go and took in his surroundings a little more.

He realized that it was a clear and still night. In the sky above them there was not a single cloud, and so the stars were visible, millions of them, and even the smudge of something pale that he took to be the milky way. The sheer scale and beauty of that sky was almost too much for Alex, and his prosaic soul frowned. The grand romantic gesture of a sky full of stars was too much – they’re not for us, he thought.

Even so, there they were, him and Drew – warm now, where they touched – lying virtually on top of each other under a cloudless starry sky. They were so close, certainly physically right at that moment, but also they had become emotionally close. They were peas in a pod. Shortly after the moment they had met their steps had moved in time with each other, and they walked through the world side by side. They discovered they had precisely the same gentle mocking understanding of everything they saw, and many of the same views and enthusiasms. They had discovered each other’s limits. They enabled each other, encouraged each other, mucked around and laughed with each other. They had – hadn’t they – fallen in love, even if it was a love they weren’t used to and weren’t able to point at and say, yes, that’s what it is and I know what to do next.

Drew knew Alex’s morning routine inside out, and one Sunday morning when he wasn’t at Alex’s place texted him emoticons of a cup of coffee followed precisely five minutes later by an image of a neat small turd like a steaming swirl of chocolate soft serve. In that moment, Alex knew they were in love.

No one knew Alex like Drew, and so conversely, to Alex, no one knew Drew as he did. They were, strangely, coupled, and yet not a couple – well not a traditional couple.  What they shared, what they had, was considered so much less than all those traditional couples boring the fuck out of less traditionally coupled people the world over. Why should they see these stars, those traditionally coupled people, and have it mean something more than it did right then for Alex? Stars were for everyone.

“What the fuck are we doing here?” Drew interrupted Alex’s slightly incoherent, but deeply felt, thoughts. His voice was above Alex, but close in his ear, and almost a whisper.

We, he had said and Alex felt warmer. Yes. There was something there – something going on. They were, somehow, in this together. Everything.

“You can have them.”

Alex imagined these people as his in-laws – imagined Rebecca as his grandmother-in-law. He would love her in that role.

“I can’t believe you approached my grandad’s funeral and wake on a drug binge.”

“Maybe not. Cocktail then. On a cocktail of drugs.”

One of Alex’s arms was gimped up against his chest and felt small and cramped, like a Tyrannosaurus Rex arm, but his fingers were close to Drew – were part of what was warmed by him – and he stretched out those fingers and played his fingertips over Drew’s shirt, stroked the fabric and felt the buttons and the slight ridges in the weave. He read it like a chest-warm page of braille.

It took Alex a while to realize that someone was watching them – not that he was aware of seeing anything, or anyone. Had he heard a step, or felt the displacement of air of a door opening and closing somewhere? Or had he seen something – a glint of light being obscured, or something simple like that? Or was it just a feeling? He didn’t know, and he didn’t pursue the thought, because at that point Drew planted a soft little kiss in his hair and Alex began to feel that the stars might be for them after all.

“Did you see that?” Drew asked a second later.

“What?” Alex asked. The moment slid away.

Alex lifted his eyes and looked across at the tall shape of the identical terrace house next door, the one behind the hedge. The top storey was visible even above the high wall that surrounded the pool. It was a looming grey glow with the arms of a sprawling gumtree over it, eerily still. Even in the middle of the night, improperly seen, that top storey looked shambolic and peeling, forgotten and uninhabited.

Or was it? Is that what he had seen – noticed without noticing?

The highest windows of the house roughly faced the pool deck. Someone standing at one of those windows could have been watching them all loved up and smoking a joint on in their amoeba-shaped daybed.

“I thought you said there was no one living there,” Alex said.

“There’s not. The old woman was found dead about six months ago.”

“Then her ghost is perving on us.”