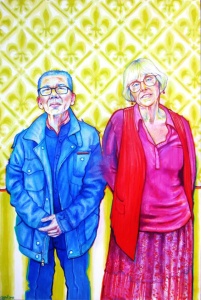 One of my first ever jobs was working in a gay pub in Soho, in London back in the late eighties. OMG,  I loved it, I was eighteen, dumb as a bag of shoes, ridiculously naïve (although I didn’t think so at the time) the cutest I’ve ever been, (all relative) worryingly slim (again, despite what I thought at the time) and I got to flirt and fiddle with a LOT of men.

I really did have the most fun ever. I would start my weekly shifts on a Wednesday and I often wouldn’t get home till Monday night to sleep my ‘weekend’ away. After shifts I would often go home with customers from the pub or go clubbing after work and end up just go straight back to work the next day (I’d buy a cheap t-shirt and have a thorough sink-wash in the women’s toilets, just in case you were wondering about the hygiene involved in such a lifestyle choice)

Unfortunately I wasn’t the only presence making themselves known on the gay scene at the time, there was a new disease that had been known as GRID (gay-related immune deficiency) but had recently become re-christened as AIDS.

It was a dark and scary time. A lot of people around me were being diagnosed as HIV+ and the gay world was effectively in shock, unable to process fully what was happening. Information was scattered and often contradictory, it felt like no one really knew what caused or spread the disease. I slept around a fair bit, but always kept to what was vaguely then called “safer sex” although my boundaries around what that was exactly were very dependent on the moment, and often (stupidly) how much I liked the person I was having sex with.

It was also a frustrating and angry time, well for me anyway. I was angry at a lot of things and I joined a queer activist group called Outrage. We went on lots of shouty demonstrations and campaigned for clearer information around HIV/AIDS and for more effective treatments. In that group there was a filmmaker/artist I really admired called Derek Jarman. Typically, I never could muster up enough courage to talk to him; he was everything I wanted to be and wanted in a man. He was a brave, unique, a creative genius and never tried to hide his sexuality, and then in later years, his HIV status. He once smiled across a crowded room at me and was like my self-worth instantly tripled, it was like being caught in a surprise sunburst on a cloudy day.

I volunteered at a charity called The Terrence Higgins Trust and became a ‘Buddy’- a person allocated to support and assist someone who was struggling with fully blown AIDS and needed a friend to lean on. A lot of people I knew from those days of support groups and memorials aren’t around anymore. I remember once standing sobbing alone in a charity shop on Fulham Road. I couldn’t find a black jacket to fit me and I had to go to my friends funeral and all the sleeves in all the jackets were too long and I didn’t have the money, or time, to have them taken up. Short arms can be yet another extra curse to those struggling with monumental grief.

It was around this time that my friend lent me her oil paints, bought me a canvas and none too subtlety suggested I work through some of emotional baggage I was beginning to carry.

Skip to a few decades later and late last year I got a job leading a few ‘Art workshops’ for a Queer youth group a few suburbs away from where I live here in Sydney.

The booking was for four Thursday evenings for the month before Christmas and I pitched running the groups as sessions all based around identity, specifically Queer Identity and what that could mean using portraiture as a medium.

The young people were all street-smart teenagers somewhere on the LGBTQI spectrum and the afternoon before the very first class, I had the very nearest thing approaching a panic attack I’ve ever experienced in my life. What if those sassy young queer people hated me? What if they all ganged together and started bullying me? The group was held in a youth centre in a very working class suburb of Sydney, what if I came across as too posh and too privileged and the kids couldn’t relate to me? What if, what if, what if.

Anyway, of course, each session was awesome, I absolutely loved the experience. It was so inspiring, informative and utterly life affirming. The future is here and it is queer. The overall and over-thought-through-theme of identity was soon abandoned, as it became clear, that the best possible outcome was that these young people just got to experience a chilled out, safe, creative and queer space where nothing was expected from them.

It was a complex feeling when it struck me, like a big pink queer steam-train, while in the second session, that the couple of social workers who had arranged this booking had done so, not because I was clever, arty or pretty, but because I was a actually an older queer person, and that had been the intention of those social workers all along. The group sessions were really about introducing the younger people present to someone who was older and completely comfortable with themselves their creativity and their sexuality.

I was so lucky that I got to London when I did; I had many older, queerer and more sorted people I got to look up to, whose smile and attention could give my self-worth such a boost. I got to live among and share experiences with elders, before the AIDS crisis in the nineties really kicked in, I got to experience a glorious mass of all ages of queers, as yet untouched by the decimation that was to come in the following decades.

The LGBTQI communities are missing a lot of people who did not get to make it through to get their stories told, their frustrations shared and their life lessons learnt from. There are gaps and missing pieces in our social jigsaw that were taken from us. We are all poorer because of that.

The painting above is called ‘Respect Your Queer Elders’ and is mainly made up of 3 primary colours, red, yellow and blue. These are the essential 3 colours that all other colours come from. Just like the equality that is now almost in our grasp, everything that the LGBTQI communities are currently experiencing, has come from those people who have fucked, campaigned, shouted and protested before us. The models for this piece are Michelle Frances Collocott and William Yang, both elders who have earned their place of respect in the (and my creative) community.

I don’t quite consider myself as a queer elder yet, although realistically I’m not far off it; however I do consider myself one of the lucky ones who gets the chance to enjoy that privilege.

(The painting ‘Respect Your Queer Elders’ is owned by The Australian Lesbian and Gay Archive.)

Back to Bent Street Cafe