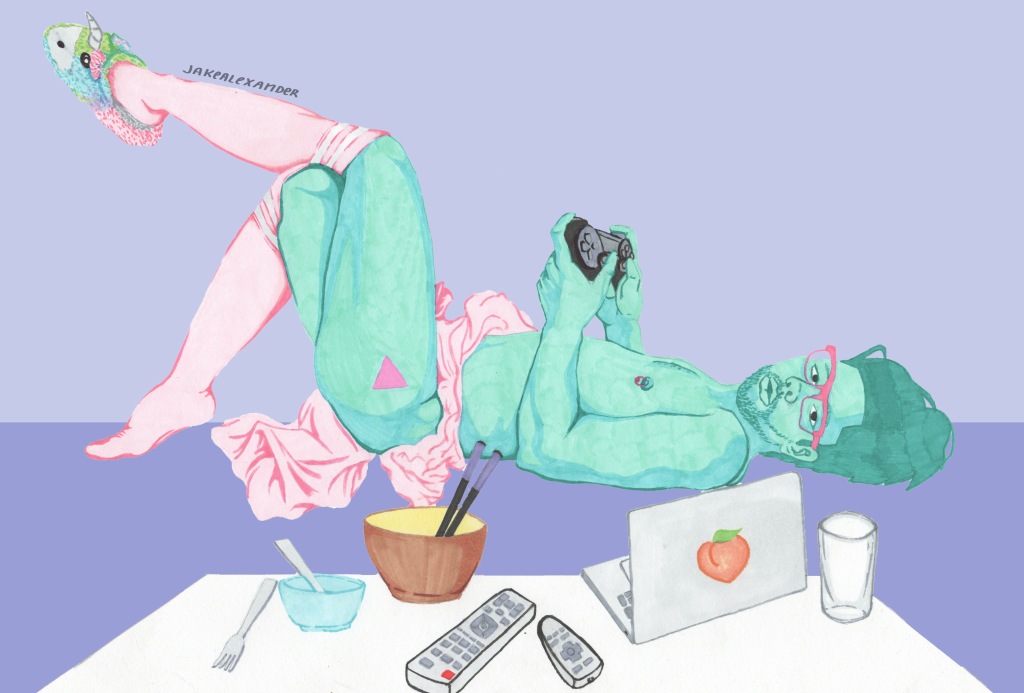 time to get my life together, 2020 MEPXY markers on 120GSM paper—Jake Cruz

For last year’s Cliﬀord Chance ARCUS Pride Exhibition, I submitted three artworks about taking on the skins on growing up as an Australian Filipino gay boy. However, a year on and the outward social analytic response approach had been completely ﬂipped on its head. Instead I’m approaching my behaviour during lockdown after my place of employment had shut.

I, for the most part, did not wallow in my not doing anything. Instead I found myself restructuring my day in a way that would include smaller productive tasks, such as doing laundry or a home workout, and being signiﬁcantly productive enough to feel satisﬁed with how I made use of the day overall.

I went through little waves of attitudes, constantly alternating between sitting around in my underwear or wrapped in blankets all day, and pretending everything was an all in one sexy chic casual loungewear look and the neighbours and paparazzi were watching me through the windows, taking photos as I feigned ignorance. Need to take out the garbage? Do some groceries? Throw on a nice jacket and work the leeeeegs.

I could see the tabloids.

I found the frequency of wearing lipstick around the house far exceeding how seldom I used to, and I became extra appreciative of non-lipstick lipstick looks, such as the ‘my noodles are too spicy’ and the textured ‘Chip Crumb Chap-lip’ looks. Something small and colourful to get excited about.

Dare say I became a Cosmetic Guru over lockdown.

I spent a lot of time delving into diﬀerent creative spaces through ﬁction or music. It felt like I was being drawn into gateways, into pockets of new places of being, where the air felt diﬀerent and the gravity changed. I felt myself ﬂoating in these vacuums of the passion and commitment of the creators and I felt abundantly more creatively driven when immersed in these spaces. I felt an immense kind of intimate commonality with the feelings and mentalities of the artists towards their respective projects where they resonated with own, even if only slightly.

As a creative, the endless bounds of free time associated with lockdown seemed like a dream come true—in fact, anywhere you looked, you could see other creatives preach of project productivity, especially within online spaces. After all, I myself have so many project ideas and visions scribbled down in numerous places to pursue, and yet, this was not a sentiment I found myself sharing.

I jumped between making no artistic decisions and then beginning numerous projects, and veering off in all kinds of media, aesthetics, conceptual, and non-conceptual directions, without ever really seeing much of them through to the end. I was stuck in a creative limbo, with the freedom to do whatever I wanted and a constantly reignited drive to create; but rarely committing to a singular project for more than 3 hours or 2 days or a week. And so forth.

I began animating a simultaneously dancing and strolling ﬁgure which began as a close shot of feet walking onto the frame. This project has yet to make it beyond said shot.

I began another animation, this time of an isolated, sentient hand—also dancing—but in a simplistic manner to a beat regular enough to hypothetically allow for a freedom of song choice for accompaniment. Whilst I illustrated the key frames and orchestrated the timing, I did not illustrate the in-between frames despite the more diﬃcult parts being completed. This project also sits unﬁnished at the time of writing.

Being unshowered at 2 or 3am while working away on a project was a feeling I had not known for two years, when I would regularly camp out in my university studio space for long stretches at a time. It was a feeling that became familiar once again.

At one point I decided to focus on dinosaurs and at another I ﬁlled a page illustrating an alternate design for an already existing Pokémon.

There were a handful of days here and there where I woke up around midday, had lunch, meandered for an hour or two, took a nap.

My laptop went with me to any room (bar the bathroom), whether I wanted to use it or not.

There were only two works I finished—the postcard design for Clifford Chance, and this piece of writing—both only due to deadlines. They help to minimise, if not erase, the embarrassment of saying ‘I had an unproductive day’ and for audiences to feel as though they are conﬁding in me. I aim to deinstitutionalise the notion of laziness for anyone beating themselves up for how they utilised their time during lockdown. It has been a time where so many are putting out such goading energies about the need for excessive productivity into the virtual world and that’s an energy I don’t want to contribute to as it can feel quite bulldozing.

Jake Alexander Cruz is an Australian illustrative artist who draws from his own experiences as a queer male to creates works focusing on how the body is perceived and how perceptions of his identity are read from his presentation.

Back to Bent Street 4.1 – Love from a Distance