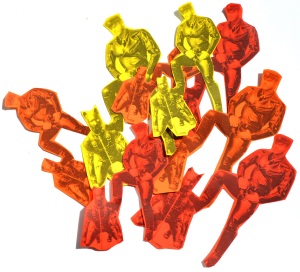 So, and this might be the gayest thing I’ve ever written, but here goes: isn’t collage fabulous!!

And just to confirm that we are on the same creative page here, collage is the cutting out and sticking down of ready-printed images to compose a new image. Oh my, if you have never tried it, please do, what fun!

It’s kind of strange that, as someone who spends a lot of time being a professional creative, I would choose another creative project as a hobby, but I like the idea of taking something already in existence (so much easier than starting from scratch) and improving on it!

And call me shallow if you will, but it doesn’t harm that collage is rather ‘hip with the cool-kids’ at the minute. If you search #collage on Instagram, Pinterest or TikTok (OMG, get me, I’m so freakin down with the kids) you’ll find endless cool and inspirational stuff.

I co-run a fortnightly drawing group for LGBTQI Elders here in Sydney, and I’m always on the lookout for activities that are both easy and exciting. And, lemme tell you, collage ticks those boxes a treat! Inexpensiveness, readily available materials, instant results and a visual narrative should we choose to introduce one. However, there’s a bit of a hurdle to navigate before introducing the attendees of the drawing group to the joyous reveal of my new creative pastime.

Now I hate to be a Debbie-downer-party-pooper here, but unfortunately there is a badly cut out dark cloud that looms over the silver-lined picnic of collage: namely all the future landfill fixtures needed to do it! I know, I know, it’s a buzz kill isn’t it; environmental concern alert! There’s always that one annoying fool at a house party who’s in the kitchen whingeing/screaming hysterically about ‘don’t use the plastic cups, they’ll never decompose and they strangle all the turtles’, when all you want to do is just pour a gin and tonic and tell them to shut up.

But it’s true, plastic cups will NEVER decompose! And this is the thing, likewise, have you ever tried to find resharpenable scissors in the modern word that can be bulk-bought without plastic handles? And don’t even get me started on how those little single-use plastic-encased glue sticks aren’t refillable and have to be totally replaced after the miniscule blobs of glue inside have been used up!

But you know, although it’s difficult, I want to try and do this properly, and not just add to the devastation of our worlds’ resources, because if, whilst introducing people to the joys of creativity, in reality, I’m just adding the destruction of our world, then I’m not really doing it right, am I?

Okay, I’m going to be honest, I’ve kind of lured you into this written piece under false pretences. This piece isn’t just about the light-hearted frolicsome joys of collage, but about how we, the LGBTQI population of this planet, are actually perfectly placed to be the ones to save it.

Ain’t no doubt about it, whoever steps forward and hands out non-plastic cups at a house party, is going to get derided, rejected and excluded by those other party attendees; but this is our superpower: we, as members of the LGBTQI communities are already completely used to that shit end of the social stick! We’ve already developed coping mechanisms and thick skin when it comes to being ‘that person’. So really, if we aren’t going to stand up for what we know is unpopular, but right, who is?

As someone who is vegan and has been ‘plant based’ (ie veggie or vegan) for my entire adult life, I am very used to the sinking feeling and compromise of beliefs needed to stand in a leather or fetish venue as the only one dressed in home-made vinyl or mock leather corsetry or harness. Fundamentally I love the look of the clichéd, big, Tom of Finland-esque, butch, hairy, leathered up daddy type as much as the next queen (be still my beating arse!). But compassion and consent are also ridiculously important to me, both in my real world and sexual fantasies, and the reality of that is, if you’re wearing leather, the animal who’s skin you are wearing was never compassionately treated and their consent was certainly never given for the torture they endured so that garment could be made for you.

There is no such thing as ‘compassionately farmed’ meat or leather. No animal ever wants to die.

Cognitive dissonance, it’s a real thing, we all suffer from it. It is when someone doesn’t connect one thing with another because of denial, or through not connecting the process to the outcome; it’s blocking something out if we don’t want to think about it—such as purchasing a wasteful single-use plastic glue-stick that has no other destination than to sit eternally in landfill and still claiming to be an environmentalist. I’m really trying to stop myself from behaving in certain ways because, once I pause and think about my process, I often realise I can do better. We can all do better. There is always room for improvement and it usually really isn’t that difficult.

Okay, back to lovely collage. The piece that accompanies this article is called ‘Leatherman-made climate change’ and is about how, at our worst, we can all engage cognitive dissonance when we choose to and when it suits us. The visual reference is a flame representing both, the burning of the Brazilian rainforests to make way for land on which to graze cattle and the Greta Thunberg quote, ‘Act as if your house is on fire, because it is’. It is a piece about how we as human beings can ‘other-ise’ other beings to the point where they are nothing to us other than a distant part in a process to further our collection of fetishistic accessories, which, by the way has a name; it is called speciesism. Speciesism allows us to neglectfully objectify animals and reduce them to nothing more than just meat and skin.

Cognitive dissonance is something no one wants to admit to, but we all do it, another example of that, would be, let’s say, when somebody refuses to see another person’s worth because of their sexuality, I think you get the picture there. We can all do better. LGBTQI people definitely can. Let’s cut speciesism out of this picture and discard it.

Years ago in my single-and-ready-to-mingle thirties I made myself a selection of good, quality vinyl harnesses (is that the correct plural for a harness, I have no idea, anyway I made several in different colours) because I wanted to go out to fetish venues and go on the sexy-hairy-daddy-hunt and oh yes madam, those homemade vinyl harnesses (and okay, I’ll admit it, matching clutch bags) worked a treat thank you for asking.

I, like you, am a complex human being who often contradicts themselves, learns as I go and I certainly am not perfect. I bought lots of glue-sticks before I thought that silliness through; now I try to use liquid PVA where I can, or I use double sided tape when it all gets a bit too tricky, but it’s all still very much a work in progress, and again, I learn as I go and admit (at least to myself) when I’m wrong.

I’m aware there’s a few heavy-handed metaphors in this piece, but it all forms a complete picture in the end, kind of. Like I said at the start, I like the idea of taking something already in existence (so much easier than starting from scratch) and improving on it. Collage won’t save the world, only we can do that. LGBTQI people and conscious decision making built upon compassion and creative thinking rather than cognitive dissonance and needing to be popular at parties can do that. Also, honestly, what kind of person drinks gin and tonic out of a plastic cup?

Guy James Whitworth grew up in Northumberland, England and moved to Sydney over twenty years ago. He is one of those artists that try to use their powers for good and is as well known for his activism around animal rights and social reform as he is for his vibrant annual exhibitions. His style of rich, opulent portraiture often lends itself to elevating repressed and marginalised members of society using the authority of visual art as a medium to do so. He has won various awards and has been finalist in many of Australia’s art prizes. His first book, Signs of a struggle has been recently published by Clouds of Magellan Press.