Tiff, hi – you’re of course the editor of Bent Street …

Yes! I’m also an Associate Professor at Macquarie researching LGBTIQ+ issues, joyfully queer, and trying to be an ally to extended and overlapping communities.

Bent Street 1 in 2017 and now Bent Street 2. And Bent Street 3 is now open for contributions. What do you think we’ve achieved since starting the journal?

I think we’ve opened up a new scholarly and creative space for the LGBTIQ+ community and our allies. This includes many different individuals, with intersecting and conflicting interests. It is a space where we can communicate about these interests and how we feel about them, amongst ourselves.

And that’s a good thing because?

It’s essential because the opposites of LGBTIQA+ arguments ‘FOR’ certain models of equality, programming, supports and so on … are not, and should not be, those supplied by anti-LGBTIQ+ hate speech. All sides of our own debates that matter should have us on them.

This really hit me hard during the marriage equality debates, when the ‘FOR’ arguments were presented by mainstream press as pitched versus hate speech; the more relevant ‘AGAINST’ arguments offered by Queer theorists, radical feminists and people who valued staying outside of institutionalising relationship governance systems were not countenanced.

So there was a false polarity?

Yes. We needed a space where we heard all arguments from all sides of the LGBTIQ+ and allies’ community on topics we care about, without hate speech occupying the ‘AGAINST’ position. Such hate speech dilutes the quality of our own reflections and ideas, and pressures people to take a position because it is ‘AGAINST’ hate groups’ positions; not necessarily because it is one they value.

What would you like to see more of in Bent Street as it evolves?

I’d like to see perspectives that have been overlooked in mainstream media outlets, perspectives affirming to underrepresented groups, and supporting goals beyond petty gradualism.

Bent Street 1 ‘2017’ had a ‘through-line’ that was about Equal Marriage and the postal vote, and Bent Street 2 – though I don’t think this was conscious – has a through-line of ‘heroes’ and role models – that was my take. Was there anything else about Bent Street 2 that you think turned out to be a thematic focus?

Yes, I agree with your reflection; there was also a through-line on the more ‘active’ activisms of 2018 –  the aggressive progressivism and unapologetic policy-change pushes. These included the #20gayteen movement, queer contributions in the March for Our Lives campaigns, and a host of other efforts from around the world where LGBTIQs (particularly young people) got highly involved in politics and social issues en masse. This came through in the book’s profiling of new activists and campaigns, and the excerpt of Adrienne Kisner’s young adult book ‘Dear Rachel Maddow’ (about a young lesbian learning local activism). Everyday youth are seeing the impacts of politics in their lives more; recognising their own political potential at higher levels and in greater numbers; and leaving the uncomfortable comfort zones of laissez faire attitudes and false hopelessness.

Do you have any thematic ambitions for this year’s Bent Street?

A: I’m ambitious for strong thematic representation of the rise, and rise, and RISE of Aboriginal and Torres Strait Islander queer communities! There is an incredible movement bursting through Macquarie University right now of exuberant, powerful, intelligent and widely varied representation of queer Indigenous identity and intersectionality. There are especially new developments in the Department of Indigenous Studies’ program offerings under the stewardship of a phenomenal ally Professor Bronwyn Carlson. This work is also benefiting from the influence of emerging academics like Andrew Farrell. 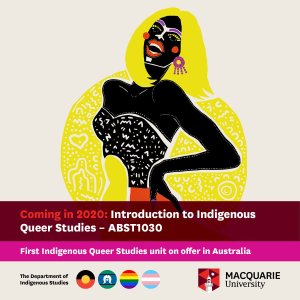 At the same time there have been jaw-dropping dramatic performances at the new Koori Gras events and a swathe of exciting new art, music and photographic essays from queer Aboriginal and Torres Strait Islander creatives! People in the movement show respect to those musicians like Lou Bennett from Tiddas and other heroes who broke new ground for queer Indigenous representation; by using new opportunities to ensure that visibility grows and flowers. We need to support this newly energised and significant movement by offering Aboriginal and Torres Strait Islander queer communities space to celebrate their achievements.

What about a political focus. There is a Federal election this year in Australia, do you see LGBTIQA+ as having a profile? I’ve heard little in the media about the religious rights report – is there anything like this that needs our vigilance?

Yes, in March this year I was speaking in parliament to promote the removal of religious schools’ exemptions in the sex discrimination amendment act. These exemptions are utterly unconstitutional and will frankly cause the Australian Government much grief if they don’t act urgently to remove them and be seen to take all steps to prevent discrimination in religious schools; for which the nationalisation of education governance and curricula makes them the increasingly responsible party. There are precedents of at least one state government being successfully sued for not acting to prevent homophobic violence in schools whilst also forcing queer kids to attend them … The Australian Government cannot promote religion under our constitution period; let alone push religious tests allowing discrimination … it will absolutely backfire for them if anyone takes them to task over it. We must also watch out for a national government that doesn’t even consider its own legal status first and foremost, let alone our LGBTIQ+ kids, over requiring adherence by law to internationally supported hugely wealthy religious bodies it should have no business requiring Australians to adhere to in laws. That is the opposite of religious freedom.

You’ve been looking into social media manipulation and its effect on the community – tell us a little bit about that.

In Europe, the Americas and the Asia-Pacific there has been evidence of election interference through bodies like the Russian Internet Research Agency and many others. I’ve explored how social media memes both for and against LGBTIQ interests were inserted into national election debates to weaponise voters so that they weakened their countries. One example was the 2016 US election. The aim appeared to be to create two oppositional groups, and turn them both against each other and against their government.

Do you think that this will be a component of the upcoming Australian election?

A: Yes. Transnational interference attempts via social media and various other means are now a basic fact of contemporary elections, LGBTIQ policy issues votes and many other major decisions impacting global geopolitics. For some years. It would be hubris or naivety to argue that the US was targeted but not ‘insert your nation here’.

When not editing Bent Street you are largely …

Laughing loudly in my lectures with hundreds of pre-service teachers, chatting quietly with a few PhD students over coffee, or typing articles in silence.

I don’t relax, just ‘divert the analysis’ to something intense like playing instruments, learning languages, or playing Massive Open World AAA video games. My favourites are ‘Horizon Zero Dawn’ and ‘Assassin’s Creed Odyssey’ – both have excellent feminist and queer content. Gaming today is mindblowingly absorbing and the next vista in literary and technical achievement. If Mrs. Shakespeare and the first Mrs. Einstein were alive they’d be building gameverses and scripting quests for characters like Aloy and Kassandra!